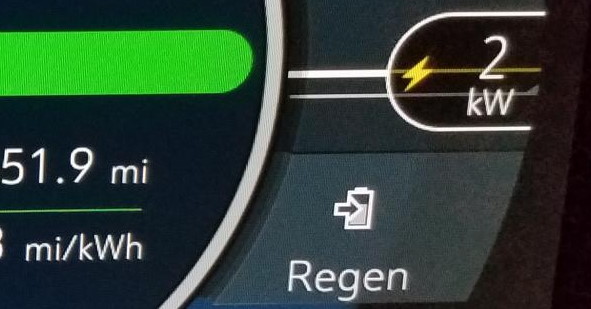 So what exactly happens when you try to regen with a full battery, and can you store any “extra” energy in the battery?

The simple answer is that when the battery is near full, the car will not be able to use the battery in order to slow down, so you will have to use the brakes yourself. Although it’s frequently described as “there’s no place to put the energy”, that’s not entirely correct. It’s just that the battery can’t charge fast enough to store that energy until you’re down to around about 94%.

Why is that? Glad you asked! Go over here to read up exactly how recharging and regen works.

To summarize: when you recharge a battery you apply a voltage higher than the battery’s rest voltage (open circuit voltage, or OCV). The battery will then draw current (A – in amps) proportional to the difference between the OCV and applied voltage. Power (kW) is current times voltage. However, there’s a system limit of 400V, so if the battery is near full then the current, and thus the power, is limited.

When you are using regen in your vehicle, the same thing occurs. The car will raise the voltage higher than the battery’s voltage to recharge. The battery will draw current, providing a resistive force which slows the vehicle down.

But if you are already at your voltage limit, the amount of current drawn will be very little which means very little resistive force is applied to slow down the vehicle.

So despite there being room in the battery to hold the charge, we cannot put the charge into the battery quickly enough to suit the deceleration needs that we have, and we have to use the friction brakes.

Another way to look at it – let’s say that your battery is a bucket, and you push it down into a full bathtub so that the bucket rests on the bottom. Water will pour in really quickly at first, but as the water level in the tub decreases, the amount pouring in will slow down until there’s only a thin stream coming over the edges. Eventually the water level in the tub will match the height of the bucket and filling will stop, even if the bucket isn’t full yet.

What we know is that above about 94% full charge, your regen will be limited. This is indicated on the dashboard by the regen icon being greyed out, and a grey line indicating maximum regen. As your SoC decreases, that grey line will start moving further down as you have more regen available.

But what happens if you really push it?

I was up in the mountains in Vermont at a sweet cottage that I was able to wire my OpenEVSE into. I had the car charged to full at the top of the mountain. I tested a few different scenarios two times each, including being about 1kWh down from full, right at full (charged at L2 until it stopped), and the slight “overcharging” that you can do if you repeatedly re-engage L2 charging after the car cuts it off (to ensure that it was absolutely at the highest that I could charge it to).

I also tested a control run with 5kWh used, so that the battery was not full by the time I got to the bottom of the hill, and I had full regen. I waited for the energy used gauge to tick up 0.1kWh before driving away in this control case.

In all cases, after going downhill, I drove away along the same mostly flat road, at the same speed, and marked the place I drove by each time when the energy used gauge ticked up the first 0.1kWh. This was all within a few hours of each other, and the weather had not changed – same temperature, no wind, so that is not a factor.

In all 3 cases, driving in L, I was able to hit basically zero regen (with significant acceleration going downhill, requiring use of friction brakes). One interesting side note – the brake lights were on automatically even though I was accelerating downhill. In the last 2 cases (fully L2 charged) there was very little regen available, although the system voltage did go up to about 401V – so there was some slight additional charging available! Nothing to really be useful, however.

The net result? All 4 scenarios had the first 0.1kWh tick-up at (pretty much) exactly the same spot after reaching the bottom of the hill.

That is to say that it’s not overcharging and hiding energy somewhere, and it’s not going “below zero used” but not showing you. It gets to fully charged, the energy used counter resets to 0, and as soon as you start using energy it starts counting up again.

One thought on “Regen with Full Battery”