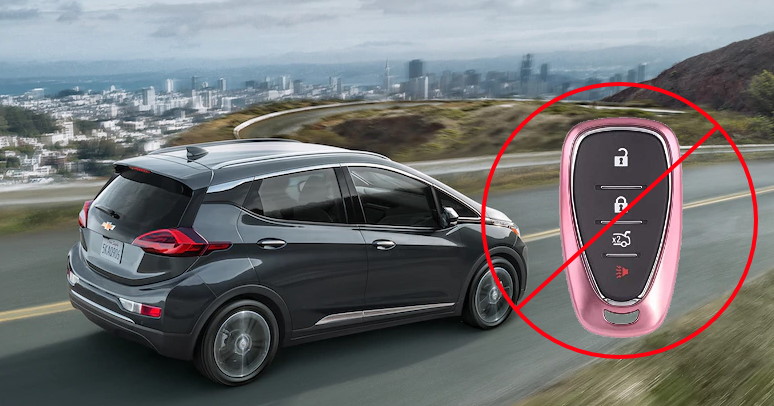 It’s strange – why does the car let you drive away without a Key FOB present in the car?

You and your spouse get in the car in the morning. You’ve decided to be nice and drop them off at their job on the way to your office. You pull over to the curb and kiss them goodbye as they jump out of the car. Traffic is coming quickly, so you speed off and immediately turn up the radio, free to sing Katy Perry without judgement. Your day goes swimmingly, and returning to your car at the end of the day you realize that you don’t have your key! Your spouse borrowed it the night before, and now has it at their job! Gadzooks! You’re stranded! Why did the car let this happen?! Damn you GM! Damn you!!

Well, there are typically warnings about this, but maybe you missed them, or dismissed them accidentally. After all, your rendition of Roar is almost perfect, that and merging back into rushing traffic was clearly more important than paying attention to pesky dash messages!

Why did the car let you do this? Note that pretty much all vehicles from all manufactures do this, so there must be a good reason, right?

As it turns out, there is a reason. Redirect your ire at the government, not the engineers.

The NHTSA has basically dragged their feet for 2 decades on actually coming out with proper regulations for keyless entry vehicles. It so centers around the existing regulations and their specific requirements.

Long story short – they can’t immobilize the vehicle if the fob isn’t present unless they can actually physically prevent the fob from being removed from the car until the driver puts the car in park. Remember how keyed cars started doing that? Then they started to auto shift into park if you opened the door? That was to prevent people from exiting their (really quiet) vehicles before shifting into park, because some people got killed by lurching cars. So hangovers from that regulation prevent this, oddly.

Also, Technical limitations means that it can also only check infrequently, i.e. when you close a door and try to turn off the vehicle. Otherwise the battery in the fob would die too quickly.

The specific functionality centers around this little tidbit in the regulations:

Except as specified in S5.2.3, the starting system required by S5.1 must prevent key removal when tested according to the procedures in S6, unless the transmission or gear selection control is locked in “park” or becomes locked in “park” as a direct result of key removal.

The electric code transmitted from the fob is the equivalent of the key referred above, and that code is removed from the car when the user presses the on/off button. Note – the CODE is the key, NOT the keyfob.

So, removal of the key requires that the vehicle be in park. Easy, they can prevent the “key” (code) from being removed because it’s not physical.

In order to abide by the rules, if the fob were the actual key, not only would it HAVE to be constantly checked for presence, but the car MUST shift into park as soon as the key is “removed”, and the car would somehow have to physically prevent the fob from being removed from the car. But since it is wireless, even if the car could be in constant communication, a dead battery or blocked signal would require the car immediately shift into park no matter what.

I’m sure you can understand why this would be a very bad idea.

So legally speaking the key is what controls the on/off state of the car, the fob cannot be the key and thus cannot control that state. Thus all they can do is give you warnings when reasonable to do so.

Now we could argue that they should check for the fob more often, for example whenever shifting out of park, and whenever ANY door closes. But again, I assume that since this behaviour has persisted for 2 decades, there must be a good reason for doing things the way that they do.