Does the Chevy Bolt have a battery buffer?

This is a conversation that comes up time and time again. Usually because people are wondering if it’s safe to charge to 100%. Normally this is a non-question as most electric vehicles do have a buffer – an area of the battery which is unusable by the end user. This is usually done to protect the battery, since extended time at 100% or at 0%, or pushing the car to those extremes can damage the battery. So charging to “100%” as shown by the car isn’t actually 100% in the battery. Usually.

For example, in the Volt the battery pack was 16.5kWh, but only 10.5kWh is accessible to the user. This makes sense, since in a hybrid the battery can to run from “full” to “empty” every day, with the gas engine providing the further range. Complete cycling like that is damaging to the cell. So running between 18% (empty) to 82% (full) provides for adequate protection. This is done by limiting the minimum and maximum voltages, so that some of the capacity is left unused.

However, in the Bolt, this sort of usage is not expected. We should almost never get to empty, as in that case the car is immobile and must be towed.

Further adding to this controversy is GM openly stating that there is a buffer, but refusing to give any details as to how much or how it is implemented. Also the car reports the “raw” state of charge (SoC) as around 96.5% when we charge to full (when viewed through the diagnostics data available through OBD2 – more on this later). So, likely there’s a 3.5% buffer at the top? Seems reasonable to conclude that there must be!

Unfortunately, when we look at the details ourselves, we cannot find anything to support this, and ample evidence to indicate that there is no buffer. For example, we do know that the battery pack is labelled at 57kWh. We can assume that this is done by normal industry standard testing methods. Based on how we use the battery (much less harsh than capacity testing is done), we can get 60kWh usable – that’s reasonable and backed up by researchable facts. However, that’s already the opposite as a buffer…

So, let’s dig in even more – first let’s talk about the pack and cell voltages.

Although the exact specifications of the Bolt cells are not available, there are two very close cousins with available datasheets: the E63 and L3 cells. Both are NMC and roughly the same size and format, and if you check out their datasheets, they quite explicitly call for 4.20V maximum applied during charging, and 4.157V and 4.15V as charging cut-off voltage respectively, with 4.157 OCV as being 100% SoC for the E63. I would see no reason to think that our Bolt cells would be any different.

There’s a scientific paper published on SoC vs OCV for NMC cells. In this case, they are using 4.135V as their 100% limit. This does add further evidence to my claim that there isn’t any top buffer.

If you want more details on how charging is done – look no further.

Normal “fast charging” of a lithium ion cell is done by limiting current to the same as the capacity, this is referred to as “1c”. So if the cell capacity is 60Ah, then charge with a maximum of 60A until you get to some maximum voltage – typically 4.20V, and then hold there until the current falls below a threshold of that maximum (typically 5%, so for 60A this would be 3A). Notice that 4.20V is the applied charging voltage. After you stop charging, the OCV will fall as the cell rests. Based on my testing on the Bolt cells, doing a “standard charge cycle” – charging at either 30A (0.5C) or 60A (1C) with a 4.20V 3A (5%) cutoff – the OCV will drop down to 4.166V after 30 minutes of rest (the usual rest time for cycling).

As previously mentioned, commonly people see the “raw” state of charge (SoC) value as obtained from OBD2, and notice that the maximum when fully charged is around 96.5%. Thus it’s logical to conclude that there must be a 3.5% buffer at the top – but that’s not the case.

To understand why, let’s dig in a little more. 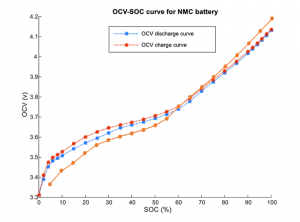 As we can see, the general idea between the two is the same, with the exception of the different maximum voltage.

As can be seen above, this table is calculated based on a very basic approximation of what the NMC curve should look like, other than a higher maximum voltage. For some reason, GM based the Raw translation table off of 4.20V maximum – but as I mentioned above, this is not normally achievable.

Immediately after charging to full – average voltage 4.1662V (actually taking average from all cells and calculating myself).

So all of this means that the GM chart looks like what is used to calculate the “raw” values inside the car. This is understandable since the chart is scaled to 4.20V maximum, but that’s not possible to achieve. This, combined with the other LG NMC cell datasheets as shown above which explicitly call 4.157V as 100%, we’re actually over that.

So with all this in mind, there simply is no room for a buffer at the top – we charge to full. I have also done tests intentionally running my battery to empty, and I can conclude that the Bolt will disconnect the battery when the lowest cell reaches 2.7V. This is well below the minimum numbers as seen in the chart above (0% at 3.3V), and is typically the low-end of the emergency cutoff values used for a lithium ion battery. Even if it could go a little lower, there is extremely little energy available below 3.0V.

Ergo, I believe that it is safe to say that we use the entire range of the battery. There is no buffer, either at the top or the bottom.

Where does this leave us with the original question – is it safe to charge to 100%?

Well, we know that all conventional wisdom (eg: 1, 2, 3, 4) with lithium ion is that charging to a lower SoC will extend the life of the battery. How much so, we don’t know, and won’t until many Bolts have been driven a great distance to give us empirical evidence to check with. But since there will be at least some protection, you might as well charge to less than full. On the 2017-2018 years you can use Hilltop Reserve to set the maximum to 88%. On 2019+ you can set a Target Charge Level to 5% increments, and between 80-90% is enough to accomplish the same thing. Having said that, we also see very little degradation with those who do charge to 100%, so feel free to do that whenever needed.