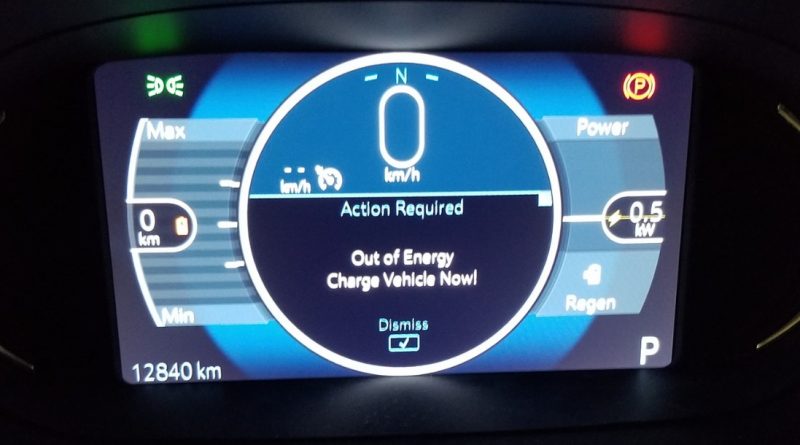 So, to try to collect data and understand the low-energy situation on the Bolt, I intentionally ran my Bolt out of juice.

A long time ago. Before we had fancy data collection tools.

It was Feb 2018, around 10pm and -7C (20F) outside. I drove it down to about 6%, then went to a nearby 50kW L3 charger (two actually) and verified that neither were in use and visibly operational. I cranked the heat (to use as much power as possible) and drove in circles around the periphery of the parking lot to document (and record some OBD2 data) as the car ran out of energy. It was fun learning all the bumps around the parking lot.

At exactly 6% remaining is when the “Propulsion power is reduced” message appeared. No affect to heat, and I was able to use 80kW of power repeatedly while driving. This is when “Low” first appeared in the guess-o-meter.

At exactly 5% remaining it went down to one bar remaining on the dash charge gauge and it started to flash.

At exactly 2% remaining there was a popup on the radio that said “The vehicle battery is low. Would you like to use low power mode to conserve energy?” and it was an option. FYI my radio is actually configured in the settings to 2%, I assume for that limit. I said no. At this point I was able to use 50kW from the battery. Shortly thereafter, but before 1%, it decreased to 30kW.

At just above 1% remaining I was reduced to 30kW of power draw, shortly thereafter it dropped to 1% charge remaining. Then after about 2 minutes (of light driving in the parking lot) I was reduced to 10kW, and about 2 minutes later down to 7kW. At this point the car was barely crawling. Note that my heater was still on full blast, which was using most of the power limit.

I pulled into the right of the two L3 stations, then decided that I should actually move to the leftmost one because there are 2 L2 chargers beside it with long cables (just in case the L3 unit malfunctioned). Funny story: I Was able to back out fine, but driving forward into the adjacent spot the car stopped moving forward. At that point, I received the “Out of Energy – Charge Vehicle Now” message. I could no longer move the vehicle, even though it looked like it wanted to. I forgot at the time, but since I still had the heater on full blast I suspect if I had turned it off I probably could have driven a little more, or at least that remaining 10ft that I needed.

Fun fact — it’s not terribly difficult to push the car yourself for about 10ft from the driver side door frame, as long as it’s not uphill.

After setting up my cameras to record the dash and the charger, and my OBD2 app recording all the car data, I turned off the heater and lights, and plugged in. At this point the battery was at 8C (46F), and it immediately went up to 16kW charging. It took 8 minutes to get up to 18kW, then 13 minutes to get up to 22kW. Over the next 36 minutes it steadily and consistently climbed up to 46kW, and held there for 3 minutes to end out the first hour at 42% charged, 29.62kWh consumed at the charger.

Note: the battery heater ran at an average of 1.8kW for the first 33 minutes, until the battery was up to 15C (59F). This is typical heat and shutoff limits while charging. The battery then steadily climbed to 21C (70F) by the end of the first hour, at about 1C every 4 minutes (1F every 2.2 minutes) of charging.

I was getting cold, so while unplugged I blasted the heat for about 9 minutes (using 2% of the battery power) before plugging in again. The charge jumped right up to 46kW again, and stayed there for about 8 minutes until 46% charged. The battery was at 22C (72F). Funny story – about 10 minutes after unplugging I received a random “Propulsion power is reduced” message. I suspect this is related to what happens a little bit later.

Here’s where it gets interesting.

At 46% charged the charge rate dropped to 38kW — this normally doesn’t happen until about 54%. Similarly, at 62% it dropped again to 23kW, which doesn’t usually happen until about 68%. The battery was up to 25C (77F). I am assuming that thermal throttling was to blame.

I stopped the charge after 40 minutes exactly, was up to 69% and 21.29kWh consumed at the charger.

Here’s where it gets really interesting.

On my drive back home, my regen limit was all over the place. It kept going up and down the energy usage area. If I floored the car, it would pull as much power as I wanted, but then *disable regen entirely*. I’d see the regen limit go right up to the 0 line and coasting in L would do no regen at all for a few seconds, then the limit would fall away and it would decelerate/regen as expected. This was repeated at least a half dozen times (I have it on video). I’ve never seen this before.

Bolt battery operates between 2.92V and 4.17V/cell, 400V battery and system limit, does not look like there is an unused cushion.

When the car is completely out of propulsion energy, (with a 7kW heater load still going), the system is at 280V, or 2.92V/cell. At this point the car disconnects the HV battery.

This explains the regen limit — when the battery is near full (395V+), the voltage is too high to permit meaningful regen since the system is limited to 400V. I experimentally verified this — during regen, the regen bus voltage will not exceed 400V.

Typical operating range of the Lithium Nickel Manganese Cobalt Oxide (1:1:1 ratio) battery pack used in the Bolt is 3.0-4.2V/cell, with a 3.7V nominal (some can go to 4.3V/cell), and a 2.50V cutoff. This means that, effectively, there is no “cushion” of unused power in the Bolt battery pack at either the top or bottom. The car operates at up to the normal voltage limit, and down a little bit past the normal limit (but far from the absolute cutoff).

Since normal charging limits on these batteries are 0.7-1C (charging at above 1C is considered damaging), this explains the 55kW limit seen on some European Amperas with higher power chargers than we see in North America.

I am still plowing through all my data collected (as well as collecting more data), and will have another post shortly about battery charging statistics!