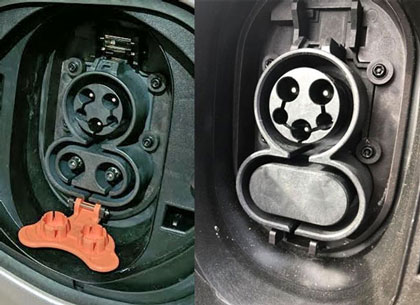 With the image above, the left car has fast charging – where the Bolt is capable of charging up to 55kW (with a newer fast charge station), or 38/45kW (with the older 50kW stations). At below about 55% state of charge, that’s about 90 miles of range in 45 minutes, under ideal charging circumstances. The orange flap is the easy giveaway. The car on the right has only level 2 charging, which is limited to 7.68kW or 32A 240V, or about 26 miles of range per hour of charge.

For some reason, GM sells Bolts without Fast Charging capabilities. Although this seems like it’s for the end user – I mean maybe some people want to save the $750 – it would severely limit usage of the car, and unfortunately dealers are terribly uneducated about the car and order them without fast charging ports, and then sell them to understandably uneducated purchasers. Then they are upset about not realizing that they can’t take their car out of the city.

In any case, several dealers said that it was possible to add after the fact, but it really looks like it is not.

At the very least, we can indentify the following pieces:

That’s minimum GMDirect pricing. So at a dealer, minimum of $1500 in parts, at least $1500 in labour, and we have no idea if reprogramming or software replacement would be required or even possible. Looks like it would be at least $3000 to get this done.

Swapping the charge port itself is about 4 hours of work

Professor John Kelly from Weber Auto did a full teardown and reassembly on the Bolt, with the intention of upgrading his non-DCFC car to a DCFC one. Unfortunately he concluded that it was impossible.

No video yet, I was too disgusted with how different EVERYTHING is on a vehicle without DCFC. It is ridiculous, it could have been such a simple upgrade.

One thought on “Can DCFC be added later?”