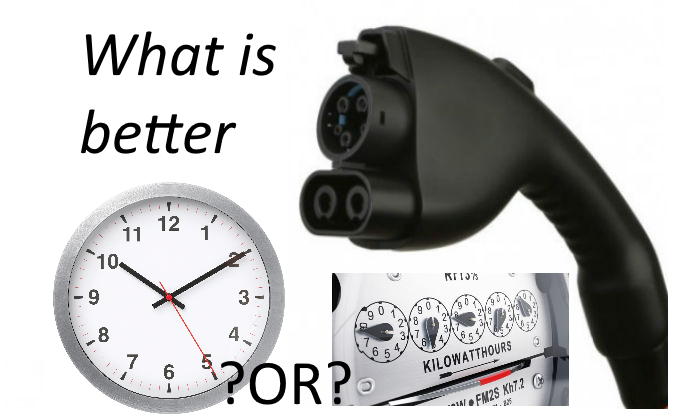 Yes, it’s frustrating when you pull up to a fast charging station and your vehicle throttles the charging down so that you are getting a lot less than full speed, yet you pay the same amount as when you do get full speed. Maybe your battery is cold, maybe you’re above 50%. Surely this is unfair business practice, and you should be paying less, right? After all, you’re paying for the electricity and getting less of it!

I hear the comparison being made to gas station pumps quite frequently. You don’t pay by how long it takes to fill up your tank, only by the amount of fuel that you take. So why should this be any different?

Unfortunately it’s not that simple.

If you were to spend anywhere from 15 minutes to 3 hours at a gas station pump because your car could have a thin straw or a 5″ wide pipe into the gas tank, they absolutely would charge you by how long you are there because nobody else can use the pump while you are. Also, the markup on fuel is tiny – really they only make a few cents a liter or maybe ten cents a gallon on the fuel itself. They make up for it in volume. At fast charging stations, this is very different.

But before we get into that, let’s look at the basic economics. The rate that any business charges for a product is a factor of not only its materials and production cost, but also the total other costs that the business has, and that sets a basis for the minimum markup charged on any product. In some rare circumstances a business can charge far more than they need to, but only when there’s no competition and nothing to compare it to. Since we charge at home most of the time for quite cheap (usually), and there are other fast charging networks, neither apply here.

Therefore, companies that run the DCFC will not charge less just because it’s by kWh. They’ll set a per kWh price that is high in order to make the same money. So right off the bat, this isn’t going to save us money vs charging by time.

As an aside, in many jurisdictions you are not allowed to charge for electricity by kWh, or doing so requires that your stations are inspected by regulators on a regular basis. This is costly, so that’s why most places just charge by time.

So let’s take a look at which way makes more sense from a business perspective. If you rent a hotel room, do you pay by the amount of time that you’re physically in the hotel room, or by the amount of time that you’re using the hotel room and nobody else can? What about car rental, where you frequently get unlimited miles and pay by the day – isn’t the wear and tear what their cost actually is? No – that’s actually not where the majority of their cost is. Yes, mileage is a factor, but depreciation just based on being a used vehicle is the majority of the cost. The reason that they normally rent out new vehicles is because they resell them within a year to get the most resale value possible – the mileage actually has little impact.

Similar to the car rental, a fast charging station has a lot of other costs other than the electricity. The initial costs are substantial, an installation with 4 stations can run about a quarter of a million to install. If you are only making a few dollars a charge, that alone will take a very long time to pay off. But there’s more. Commercial power can be sometimes more expensive than residential, especially when considering something called demand fees.

Basically commercial institutions pay based on the maximum power that they can use during the month, since the infrastructure has to support the maximum. These rates can be quite expensive, and run into $4-10 per kW. So even with a single 50kW station, that’s $200-500 per month just to have the station powered, nevermind the cost of the electricity itself. Even with 100 charges a month, that’s another $2-5 per charge there again. Now if we consider rent, which can be a thousand or more, and $250k installation paid over 10 years (another couple thousand a month), … you get the idea.

So now that we understand why fast charging is more expensive than charging at home, which way is actually better for the end user?

When charging by time, users are encouraged to charge at peak efficiency and when their car can charge the fastest. This means that most vehicles that don’t charge exceptionally fast actually pay less than they should because the per time rate is averaged out across all users. They are motivated to stop charging somewhere around 2/3 full as the charge starts to taper quite down, opening up the charger for other users. This makes sense from both the user and the charger’s perspective.

When you charge by kWh, the Rate will be set high enough so that they make the same amount of money overall. This penalizes everybody who has a slower charging vehicle (less than 100kW) and encourages charging to full because it doesn’t matter how long it takes. So you’ll have people charging 80%+ hogging the charger while others wait in line. This is the worst possible scenario.

When you take a look at the total cost of setting up, installing, maintaining one of these charging stations, the electricity usage itself on a per kilowatt-hour basis is a small portion of the cost. The hardware, rent, and demand charges account for 80%+ of the cost of running a station.

As early adopters, if we want more DCFC stations, we have to be willing to pay for it. If it’s not profitable, there simply won’t be any. That’s business 101.

A hybrid system would be the most fair – charge by time and kWh at cost. Unfortunately those with slower charging vehicles would have to pay a disproportionately higher cost, but that’s what makes sense from a business perspective.